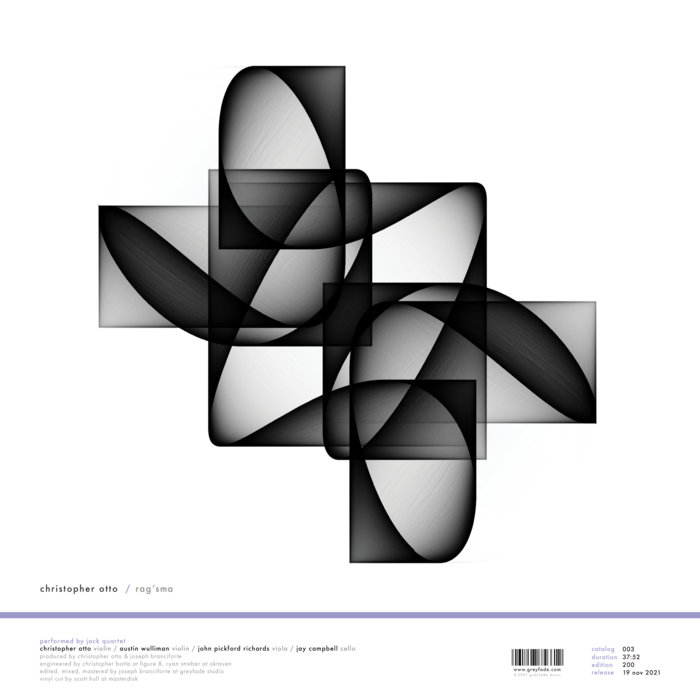 “I don’t think one needs to understand the mathematics at all to enjoy this music,” says violinist and composer Christopher Otto. Given the breathtaking mathematical precision involved in Otto’s work, it’s a fairly remarkable statement. “It’s more important that someone finds their own way into it. If they are really curious about how it’s put together mechanically, that’s great. But I wouldn’t want anyone to think that they have to slog through some technical jargon in order to appreciate the piece.”

Listening to rag′sma, a dazzling, immersive new triple string quartet and Otto’s full-length debut as composer, it becomes clear that his compositional thinking is informed by mathematics and mysticism in equal measure. His work forges deep connections between the rational world of numbers, the physicality of instrumental performance, and the subjective sense experience of the listener in ways that allow it to operate at multiple levels simultaneously: part science experiment, part virtuosic performance practice, part otherworldly sound sculpture.

As a founding member of JACK Quartet, one of the world’s premier contemporary string quartets, Otto is best known as a gifted interpreter of other composers’ music, working closely with leading figures such as Helmut Lachenmann, Georg Friedrich Haas, John Luther Adams, Philip Glass, and John Zorn. “Chris Otto is one of those ultra-rare musicians who combine complete technical mastery with the profound depth of feeling of an old soul,” says Zorn. “He is 100% music and brings a passion to everything he plays, elevating it to a level that is often beyond the composer’s wildest dreams. Chris is a living treasure — and his work is a miracle.”

But before the formation of JACK and a career performing some of modern music’s most revered composers, Otto pursued a dual undergraduate degree in math and music composition from the University of Rochester and Eastman School of Music. “When I started college, I wasn't sure if I wanted to do music or math as a career,” says Otto. ”I was interested in learning math for its own sake, but also for its potential connections to music. I especially enjoyed abstract algebra, and learned of some interesting work connecting it to music and sound.”

More recently, Otto has been attracted to just intonation as a framework for connecting mathematics and sound. Just intonation (JI) is the practice of tuning musical intervals to whole number ratios. In contrast to twelve-tone equal temperament (12TET) — the default tuning system in the West since the 19th century — JI treats these pure, rational intervals as its musical building blocks, rather than the twelve notes of the traditional Western chromatic scale.

“I first encountered JI when I was 15 or 16, through the work of Ben Johnston. Johnston had taught at the University of Illinois in Urbana-Champaign, where I grew up, and a former student of his introduced me to the central concept of just intonation, the idea that pitch can be organized rationally, that is, in terms of ratios of frequencies.” Otto explains. “So in just intonation, an octave is a 2:1 ratio, rather than twelve half-steps as in standard twelve-tone equal temperament. Unlike irrational, equal-tempered intervals, these rational intervals, like 2:1 (octave) and 3:2 (pure fifth), create cycles that align periodically, which gives the intervals a feeling of stability and distinctiveness. The infinite number of intervals range from the simplest to the most complex.”

For rag′sma, Otto drew inspiration from a particularly complex interval known as the ragisma — a ratio of 4375:4374. The size of this interval, 0.396 cents, is so small that most would say it cannot be perceived as such by the human ear. But for Otto, a musical universe that accommodates such fine gradations of pitch is one with much larger structural implications. “Equal temperaments are often used to approximate rational intervals in order to reduce the intervals to a finite number. Working in just intonation gives me a much broader palette of colors to work with and enables a finer-grained control of harmonicity.”

rag′sma’s design specifies three string quartets: Q1 and Q2, which are pre-recorded, and Q3, an optional part to be performed live.

Q1 and Q2 both begin at the same starting pitch of A=442 Hz and build outward using simple just intervals such as thirds (5:4) and fifths (3:2). Although each quartet steps forward using only the most basic and consonant of means, microtonal pitch discrepancies eventually begin to accrue. After a minute or so, Q1 has ascended by precisely one ragisma (0.396 cents); slightly later, Q2 completes its descent of one ragisma. The quartets continue spiraling in this way, each time forging a different melodic path of thirds and fifths, invariably arriving one ragisma higher (Q1) or lower (Q2). As these infinitesimal discrepancies become more and more perceptible, the listener is led into increasingly exotic harmonic terrain.

If Q1 and Q2 might be compared to two individuals on divergent trajectories, Q3 could be described as a constantly expanding and contracting bridge between them. “Like a guide, Q3 swells in at moments trying to harmonically unify the first two quartets,” explains Anna Katsman in the LP’s liner text. “It re-contextualizes the notes produced by them as overtones of a projected fundamental. Aided, our ears are alleviated of their confusion, misperception, and subjective projection as they look for unity.”

It was Otto’s intention that the piece function equally well with and without the third quartet layer. It is presented on this recording in Q1/Q2/Q3 and Q1/Q2 versions, as well as a version that dovetails between Q1 and Q2, revealing their individual melodic trajectories. Each version was given its own version-specific spatialization and mix by greyfade founder Joseph Branciforte.

The other three members of JACK Quartet — violinist Austin Wulliman, violist John Pickford Richards, and cellist Jay Campbell — share Otto’s fascination with just intonation. Their willingness to embrace its notational challenges, as well as its particular physical and mental demands, have made them a first-call ensemble for composers such as Catherine Lamb, Marc Sabat, and Georg Friedrich Haas, all of whom have written just intonation works for JACK. Otto has increasingly involved JACK as a part of his compositional process, treating the quartet as a laboratory for ever more ambitious experiments. Perhaps most of all, it is this symbiotic relationship that allows JACK to take Otto’s work so convincingly from the realm of speculative theory to one of vital music making.

It is also fitting that for Otto the connections between mathematics and art, the rational and the mystical, are best resolved in his dual role as composer and performer, using the language of just intonation.“For me, just intonation’s significance lies in the way it connects the abstract with the sensual, the universal with the particular, the eternal with the transient,” says Otto. The same could certainly be said of rag′sma, which elegantly forges these connections while expanding the known universe of string quartet performance.