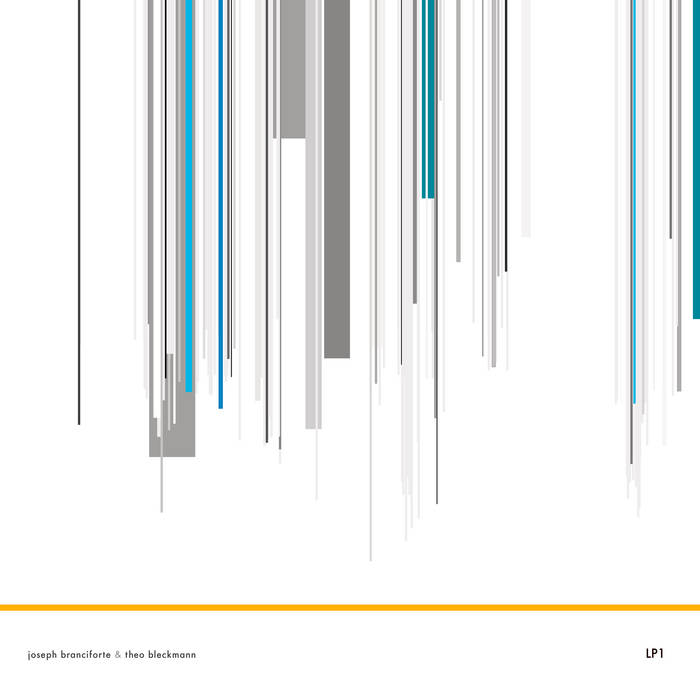 notoms The composition through sounds; voices, instruments, samples is superb. The mix is smooth and without stretching for the clichés of electronic music. A favorite

Adrien Capozzi would not be out of place on the 12k label. Fine stuff!

In the early days of spring 2018, Theo Bleckmann and Joseph Branciforte retreated for two days of uninterrupted sonic exploration. In some ways it was a meeting years in the making, in others a wholly spontaneous encounter. Without a note of music prepared or a word of discussion, the two arrived at Branciforte’s Brooklyn studio, armed with an array of looping devices, guitar pedals, found objects, and sound-making machines. The results can be heard on LP1, a debut recording as finely distilled as it is wildly exploratory.

Branciforte had long been a deep admirer of Bleckmann’s work -- he grew up obsessively listening to records like Bleckmann’s Origami and Ben Monder’s Excavation, later working as producer & recording engineer on Monder’s Hydra (2013), in which Bleckmann played a prominent role. It wasn’t until 2017, however, that the two collided creatively: Bleckmann stumbled upon an online sound journal that Branciforte had been maintaining, which contained his ongoing studio experiments with Fender Rhodes & synthesizers, elaborately manipulated via pedals and modular processing. A musical friendship was born, and two successful duo performances followed later that year.

In 2018, the pair was invited to perform alongside pioneering electronic musician & composer Ryuichi Sakamoto. In the days leading up to the performance, the two met at Branciforte’s studio to experiment, their first time making music together in a non-public setting. The four tracks comprising LP1 represent a musical snapshot of those improvised sessions, ranging from the edgy and dark to the delicate and pastoral. Through the process of live asynchronous looping, the pair builds and dissolves complex sonic structures in realtime, achieving an impressively immersive sound without the use of studio overdubbing.­

Having amassed a substantial amount of raw material, catalogue numbers were assigned to the improvisations and their subsections, a system whose logic is reflected in the final track titles. Editing, mixing, and further manipulation by Branciforte continued through the summer and early fall, with the album pared down to a concentrated 35 minutes in the end. The set is bookended by two darker pieces that stretch the harmonic and textural language of ambient, while the record’s center cuts tend towards sensuous and sublime abstraction.

Bleckmann is widely known for his arresting and hauntingly emotive voice, an instrument capable of producing all manner of tones and otherworldly textures. Contextualized here by Branciforte’s contrasting palette, his sound can be apprehended in a wholly new light. The warmth and fragility of the human voice is merged with the clicks and whirs of machines, the rawness of analogue synthesizers, and the grainy imperfections of decaying tape loops. Branciforte uses the entire surface area of the audio spectrum as counterpoint, extending Bleckmann’s three-and-a-half octave range into impossibly sub- and super-sonic realms. At other times, the two performers appear to merge together into a single sonic entity, the lines between voice and machine blurred beyond recognition.

While these pieces were born of improvisation, they display a patient and deeply compositional logic. LP1 manages to walk a fine line between discovery and restraint, emotion and form, identity and dissolution -- outlining an expanded vision of ambient music that embraces narrative and arc as much as landscape and line.