From the Machine: Volume 1 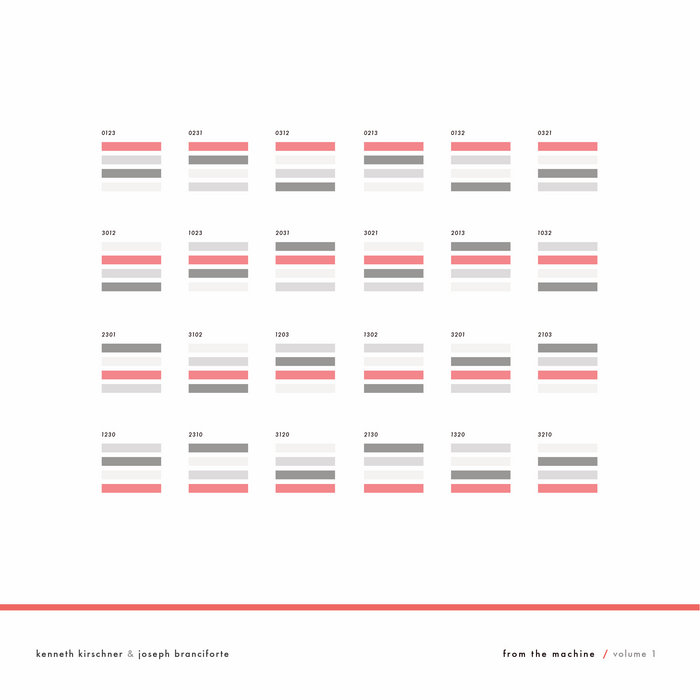 The first volume in an ongoing collaboration between composers Kenneth Kirschner and Joseph Branciforte, From the Machine explores the application of software-based compositional techniques — including algorithmic processes, generative systems, and indeterminacy — to the creation of new music for acoustic instruments. Featuring members of Flux Quartet and International Contemporary Ensemble.

Although digital approaches to music-making are most closely associated with the use of electronically generated (or modified) sound, computer-based composition opens up a vast space of possibilities beyond timbre, into fundamental questions of basic musical structure. Kirschner and Branciforte set out to explore some of these possibilities by adapting techniques from electronic composition — including algorithmic processes, generative systems, and indeterminacy — to the creation of new music for acoustic instruments.

Kirschner’s April 20, 2015 began its life as a completely electronic composition, constructed through the digital manipulation of fragmentary piano and string recordings. Using digital techniques such as time-stretching, looping, and recombination, Kirschner transformed a small amount of audio source material into a composition rich in gesture and intricate in form. In 2017, the piece was painstakingly reverse engineered by Joseph Branciforte, resulting in a fully notated score for small chamber ensemble. Although the digital domain is often associated with the rhythmic conformity of a fixed grid, Kirschner’s compositional process unfolded in a free, entirely non-metric space. The primary challenge in adapting April 20, 2015 for performance was thus the need for a metric structure that precisely captured the emergent rhythms of the electronic composition, all while remaining intelligible to performers.

Recorded by pianist Jade Conlee and cellists Mariel Roberts and Meaghan Burke, the acoustic adaptation of April 20, 2015 brings a new level of nuance and a heightened sense of drama to a piece originally composed without the human performer in mind, while preserving the expanded sense of rhythmic, harmonic, and structural possibility that Kirschner unearthed in the digital realm.

Joseph Branciforte’s 0123 is a generative work dedicated to the systematic exploration of a single four-note pitch cell — {0123}, a simple chromatic cluster — and the effects of its transformation through musical voice-leading. Composed entirely in the Max/MSP programming environment, the underlying algorithm derives the complete harmonic vocabulary of {0123} playable by a given set of instruments — in this case, a low string quartet consisting of double-bass, cello, viola, and violin — and defines rules for organizing and traversing the resultant data set. Beginning from the ensemble’s lowest possible voicing, the piece ascends through a meticulously constructed voice-leading spiral with inexorable logic, spanning one octave of the double bass’ range over its nearly 20 minute duration and forming a closed musical loop. Compositional parameters such as rhythm, tempo, and dynamics are all controlled by the same underlying data set. The result is a rigorously procedural work, one that ultimately enlists computer algorithms to mediate between the realm of pure mathematical possibility and its realization in musical space and time.

An entryway into Kirschner and Branciforte’s ongoing experiments with digitally mediated chamber composition, From the Machine: Vol. 1 also represents a point of departure for the greyfade label as a whole, which seeks to be a vital outpost for algorithmic and process-based music in the coming years. Whatever novel results lie ahead, Kirschner and Branciforte’s first release provides a model for a music that is elaborately constructed, exactingly realized, and deeply personal all at once.